Just last week, Brett Tabke, WebmasterWorld founder and leading SEO spokesperson with connections to Google, predicted a new Google update before the year is out.

"Larry Page has been at the helm coming up on six months. According to various reports, LP has put alot of faith back in the algo nerds. I look for a Florida like update on the organic side before the end of the year."

Historically, any kind of warning of an algorithm update was merely hearsay. But when a figure of such repute as Brett Tabke mentions a new Florida-sized update is in the offing, it seems safe to assume the update will be one of significant importance. As such, given his connections, history and knowledge, it would be prudent to take this slightly sparse blog post, seriously.

Before we can begin to try to draw conclusions about what these changes might entail, we need to look at the history behind Google and its algorithmic updates. There are many excellent articles about the history of Google and its various ranking changes. So instead I'll take a quick look at just the important bits in the Dickensian manor of Scrooge and the Ghost of Christmas past.

By 2003, the internet was a well established platform for a wide range of industries. Plenty of businesses were already reliant on the new and exciting opportunities it offered. Search engine optimisation (SEO) was still an unknown acronym to many, even to those within the industry.  However, after the Florida update, SEO became big news and an established business in its own right. The reason for this was twofold. Not only was the update a massive change to Google's previous algorithm, the timing to webmasters and site owners was inherently flawed.

On 14November 2003, the first mutterings of unhappy SEO's and webmasters began to appear in forums. At the time, monitoring multiple Google data centres was a hobby of many Webmasters and aspiring SEO's alike.

So what happened? In short, Google tried to update its ranking algorithm to weed out sites using questionable optimisation techniques to rank higher in the search engine results pages (SERPs), than they should. A huge number of websites found their rankings disappear overnight, with no idea why, right in the middle of the most important part of the year, the Christmas run in. Not only were small to medium sized businesses (SMEs) affected, a lot of well established and highly reputable companies found their rankings dropped significantly. Firms lost income, some even went bust. General outcry ensued.

Google learned a great deal from the Florida update. It decided future ones would be thoroughly tested and implemented progressively to minimise disruption.

Fast forward eight years and 12 updates on and the SEO world is a very different place. Google has engaged in a much more transparent approach using platforms like blogs, forums and YouTube, to communicate with SEO practitioners worldwide. Matt Cutts, a Google employee in the Search Quality department, acts as a public face of the company, answering and engaging with users on a wide range of subjects relating to search using his personal blog, Google's blog and YouTube.

Panda, Google's latest update, implemented in February 2011, was announced to the world on The Official Google Blog by Matt Cutts and fellow Googler Amit Singhal. In a post called Finding more high-quality sites in search, both reiterated their ultimate goal of returning results for the most relevant websites for a user search query before going on to divulge the size of the update (almost 12% of all queries) and its reported effectiveness - a stark contrast to the clandestine approach  of 2003.

So what might be behind the big update predicted by Brett I hear you ask? Well, the forums are awash with theories (including conspiracies) and conjecture. However, it is most likely the 'Brett Update' will incorporate one or a collection of the following:

Exact Match Domains - The first possible change could be the long awaited decision to deal with Exact Match Domains (EMDs).  For example, if you perform a search for 'blue widgets', one of the top results is almost certainly going to be www.bluewidgets.com (at the time of writing this domain was #1 for that search). Domains that contain the keyphrase are deemed highly relevant; add into the mix inbound link text and all of a sudden relatively weak domains become highly relevant.

In this video on 7 March 2011, Matt Cutts says Google has looked into EMDs and has been working on turning down their potency.

Social Signals - Earlier this year, SEOmoz compiled a survey about future ranking factors. Leading figures in SEO circles were asked to list whether they felt a particular factor, such as social signals, would increase or decrease in importance in future. Social signals were predicted to increase.

You would be right in thinking this is just the opinion of a few (non-Google) SEO nerds. However, with the recent release of Google's own social media project, Google Plus, rumours of an increased weight on social signals are entirely logical. Google Plus's data was quickly reported in Webmaster tools just in case anyone had any doubts as to how Google intends to use this new data. Given consumers spend a fair amount of online time using Social Media, it makes sense that Google should look to use data generated from these areas to help improve the accuracy of its index.

User Experience - Another area for the search engines to leverage for a ranking factor is user experience. This metric was indeed voted as the most likely factor to increase in importance in future algorithms in SEOmoz's survey.

If a site experiences an excessive bounce rate for a particular term, it would be logical for Google to factor this in as it clearly indicates user dissatisfaction at the visited result. With more users switching allegiance to Google's own browser Chrome, it will allow Google to generate even more accurate user experience statistics to apply to the index.

So what steps can you take to protect yourself from the new update?

Here are some techniques Greenlight recommends you use to position yourself for future updates.

Exact Match Domains - If you are currently experiencinga boost in rankings due to ownership of an EMD, it is safe to say your days are numbered. Whether this happens as part of a major algorithmic update or the ranking value of your domain is slowly diminished over time, is difficult to guess. Only time will tell.

Social Signals - We highly recommend adding social media buttons like those shown below, where applicable. Draw attention to and/or incentivise to encourage sharing. Whilst the amount of value social signals have currently is a matter of debate, they can, in the meantime, help generate traffic and moving forward, increase your companies' social footprint. 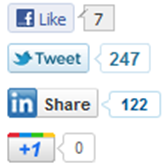 User Experience - Given this was voted the factor most likely to increase in importance in future updates in the SEOmoz survey, it seems a safe bet to take a closer look at the user experience you provide. Does your site take too long to load? Do you have Crawl Errors in Google Webmaster Tools? Do some of your pages have a high bounce rate? If the answer to any of the questions above is positive, then it is probably a good time to perform a little site maintenance.

How much do Google rankings fluctuate in a day?

Welcome to Greenlight's weekly dose of Blog Watch! It's that time when we share the latest news and insights that have caught our eye....