As companies become more and more comfortable with search as a marketing medium, we've seen increasing numbers of ATL (above the line, or TV, radio, press, outdoor or cinema) advertising campaigns utilising a search based call to action either instead of or in addition to a web address. The attraction of this approach is obvious; telling people what to search for is a lot more memorable than having them remember a web address - even a short "vanity URL" - and makes the marketing approach more interactive ("pull" rather than "push" marketing).

Obviously this only works well if you can be sure of capturing as much of the resulting search traffic as possible.  That means bidding for position using PPC and ranking naturally as well - something which is very easy given the long lead times that these ATL campaigns have and the (usually) uncompetitive nature of the terms in question.

Unfortunately while many companies are cottoning on to driving the search demand (the first half of the equation), it's rare that I see one properly satisfying that search demand.  One such campaign that's caught my eye recently is "spark something" by Sony Ericsson. 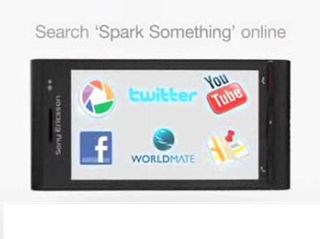 "Spark Something" is designed to promote the new Sony Ericsson Satio handset.  The TV spot by Saatchi & Saatchi features a congregation of people riding space hoppers and ends by encouraging viewers to "Search 'Spark Something' online" (as my still from the ad illustrates), while the accompanying billboards also prominently feature the phrase "Spark Something".  All this has led to a healthy spike in search activity for the term.

Here's a screenshot of the Google SERPs for the term "spark something" at the time of writing (click for full size image).

Predictably there's no Sony Ericsson page anywhere in sight.  In fact, http://www.sonyericsson.com doesn't even rank in the top 100 for this term.  Instead, the SERPs are dominated by two unrelated marketing agencies and commentary on the campaign itself, none of which make any attempt to sell the Satio to consumers (which is, after all, the whole point of the campaign).

Also, in the PPC results, Sony Ericsson is being outbid on the term by Vodafone.  At one point (sadly not captured) Orange and http://www.mobiles.co.uk, a mobile phone aggregator, were also outbidding the official site, leaving the only Sony Ericsson presence as a lone ad relegated to the right hand side of the page.

In this case Sony may not mind too much due to the fact that those sites are end providers that are actually selling the Satio, but it does serve to illustrate one of the dangers of relying only on AdWords to capture any search traffic you are driving with ATL activity, namely the fact that there's nothing stopping anyone else from bidding on your term as well.

Looking Beyond Google
It gets worse when you take a look at both the Bing and Yahoo! search results for the term. While Google accounts for anywhere from 80% to 90% of searches carried out in the UK, assuming that everyone reading search spark something online will automatically go to Google seems like an oversight at best.

Yet in Bing not only is there no organic presence (the organic results are largely similar to those at Google), but no PPC ad either.  That's right; for a term that Sony is probably spending millions driving search demand for they have no presence at all in one of the top 3 search engines.

Meanwhile in Yahoo! http://www.mobiles.co.uk is running the only paid search ad, and is probably benefitting handsomely from Sony's ATL spend.  Fortunately it's not all doom and gloom for Sony Ericsson as, due to the relative simplicity of the Yahoo! algorithm, they've managed to attain a position 3 ranking for "spark something" (quite by accident in this case; the term appears once on the homepage in some text that is usually hidden behind the main flash navigation - disable JavaScript in your browser to view this).

Summary
Though I've picked on Sony Ericsson's "spark something" campaign here due to it's relevance to the present, not a month passes without someone else doing the same thing, and I daresay more examples will appear here on the Greenlight blog in the future.  The point is not to lambast the spark something campaign but rather to underline the importance of SEO in the marketing mix.

SEO will, with minimal investment, secure visibility for a search based call to action across all search engines, not just Google.  This is particularly important for those users accustomed to skipping the paid search results.  In addition having a presence in both the natural and paid results is proven to increase click through rates for your brand over and above what simply having two results would suggest, offering insurance should your call to action term be subject to rival PPC bidding.  It's much harder for competitors to respond with a natural search answer at the drop of a hat than it is to write 70 words of ad copy and switch on an ad.  Lastly, SEO competitive research in the early phases of an ATL campaign can help to inform what call to action to use in the first place.

All that makes SEO somewhat of a no brainer when it comes to using search based call to actions - one that any company about to embark on a new ad campaign would be wise to consider before launch date.