I don't mention this anecdote as some kind of indictment of the human race, the media machine or as a comment on modern society's reaction to celebrity death - that horrible race to the bottom to crack the best joke on Twitter (having partaken in said activity, I'm really in no place to comment anyway). Instead, I was struck with how blasé we all were that warm summer evening about our own ignorance. We didn't have time to wait for further details, we had a life to live. Similarly, the Twitter account that had posted the information had no time to compile the details, such was their imperative to post the news in its most basic form.

Simply put, this ultimately speaks most prominently about our ever diminishing attention spans, which is likely to have a huge influence on every creative industry, and importantly for us, this most certainly includes marketing and

social media. In days gone by, at the time of the emergence of modern marketing and commercialism as we recognise it, copy could be an entire page of a broadsheet newspaper. Less is more was barely a consideration as advertisers had paragraphs worth of prose to exploit for commercial gain.

Needless to say, the internet changed all that. Long before social media became ubiquitous, the ease at which information could be accessed, shared and consumed at a faster rate was already beginning to debase the currency of long form writing online.

The fear mongering around the supposed slow death of journalism is now reaching new heights as the old guard of the industry diversify into dating websites, professional networks and even a fully fledged coffee shop (sneered at by the Twitter majority on launch day, Greenlight certainly weren't complaining about #guardiancoffee - we had complimentary coffees all round!). But unsurprisingly, the biggest change has come in how news outlets are utilising social media channels, fully aware of the fact that a large portion of their followers or fans may never engage with them past reading their tweets.

Brevity is now king. Where once people who 'didn't get' Twitter complained incessantly about the 140-character limit, it is now virtually a universal fact that the limitations are what makes Twitter tick so well. It is the perfect consumption tool for the new age user with neither the time nor patience to read anything that isn't in a bitesize format. This has been clear to marketers for some time, but the newest trend is perhaps more unexpected, as brevity is now reaching much further than textual content.

YouTube used to hold sole domain over the short form online video market, and in contrast to Twitter which challenged marketers to reappropriate their message into a shorter format, YouTube probably constituted somewhat of a liberation for marketers used to having just 30 seconds on television to sell a product via video. Few would have thought the typical content type on YouTube could be pared down further and still be of mass interest but the explosive popularity of Vine, which limits users to just 6 seconds of video per post, has shown that the truncation of video content is appealing just as tweets are. 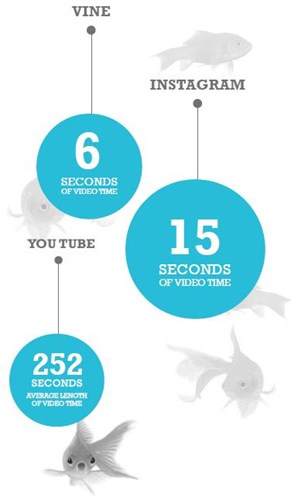 Vine, and now Instagram with their introduction of 15 second videos, therefore present new challenges and opportunities for marketers. It is unlikely YouTube will drastically fade as a marketing tool when faced with these new would-be usurpers, but content strategies for advertising and social campaigns will need to take into account both the long and short forms of video with equal significance.

With Instagram videos clocking in at half the length of traditional television advertising, it may be more feasible that marketers harness the benefits of that channel first, whilst Vine's frenetic pace almost means it is barely definable as a video in the traditional sense. This makes Vine the greatest challenge, and opinions are conflicted over whether early marketing applications of the service are good or bad.

It is perhaps obvious which of the two services will yield the greatest examples of creativity. The lazy marketers out there will be much more drawn to Instagram where television and YouTube segments are repurposed easier, whilst Vine's limitations will impose a minimum requirement level of creativity that may produce some real ingenuity. Vine is already populated with all kinds of out-of-the-box thinking, and it is only a matter of time before marketers ollow suit and find their own creative methods that outperform the mixed efforts so far.

Our retracting attention spans may mean we should lament for broadsheet newspapers, libraries, art house cinema, interpretive dance or anything else that requires a level of concentration and patience to enjoy but we certainly shouldn't lament for marketers. Marketers can rarely define the formats through which they need to communicate with consumers, and the job itself is simply maximise the potency of a message in whatever medium is required.

A new challenge awaits and we all need to practice. So tonight I'm going to make a few Vine videos of my dog.