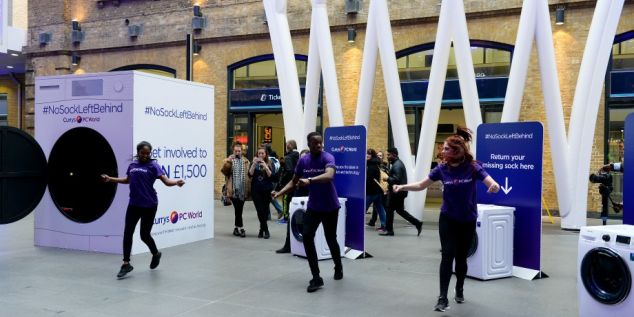 Currys PC World created a live takeover of King's Cross on Wednesday (23 March), in order to promote the new Samsung Addwash machine to the 'time-poor' creatives that work in the area.

The brand's head of marketing for white goods, Zeena Hill, told The Drum the activity was designed to push Currys PC World to the front of consumers' minds as a leader in the large appliance arena.

The event saw a giant washing machine installed in the north London terminal, while a troupe of break-dancers performed around the centrepiece every hour from 7am until 7pm. 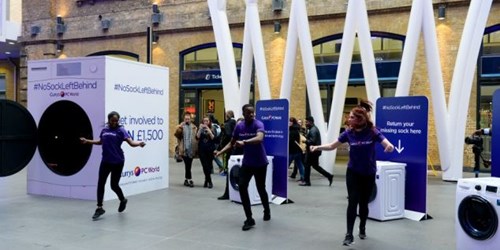 Promotional staff handed out 'socks' around the activation as part of its #NoSockLeftBehind engagement mechanic. Passers-by were encouraged to return the missing socks, often lost when doing laundry, to the washing machine for a chance to win £1,500.

Hill explained that the location of the experience was crucial to the brand.

"Making a noise in one of the busiest stations in the UK was an obvious choice," she said. "King's Cross is a real creative hub and the tech scene there is really booming.

"We saw tech start-ups moving from the likes of the Silicon Roundabout when King's Cross underwent its regeneration project, and we knew that the innovative design of the Samsung Addwash would spark interest to the commuters passing through."

This article was first published in The Drum.